Denver Connection is located just 8 miles south of Denver’s airport. Denver International Airport is the fifth busiest airport in the country and the only major airport in the top 5 with room to grow.

Of the over 53 million passengers that use DIA, 55% are coming or leaving Denver. Another 31,000 people work at DIA. For Denver Connection, those statistics translate into major visibility and access to millions of people.

DIA offers companies, residents and employees access not only across the country, but also throughout the globe. DIA has non-stop flights to over 180 destinations including Europe and Asia. DIA’s three hubbing airlines, United, Frontier and Southwest help ensure competitive fares.

DIA opened on February 28, 1995.  The $5 billion, 53 square mile facility is now the largest airfield of any US airport and is designed to incorporate the latest technology and safety.

In addition, the airport has developed an accomplished record for on-time performance, safety, and convenience. In 2000, the United States Department of Transportation granted $21.5 million to Denver International Airport for construction of a sixth runway. The purpose of this runway is to increase the number of international flights that can be accommodated, as well as ensure that the airport is operating efficiently.

The addition of ANA’s non-stop service, now ensures that Denver Connection residents and businesses have nonstop access to Europe and Asia.

For more details about DIA, see their press kit. 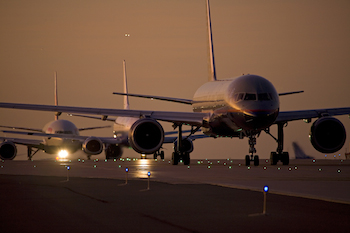 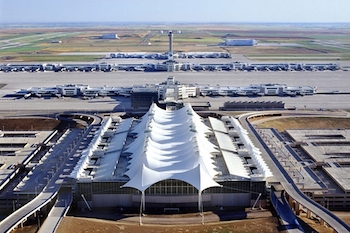